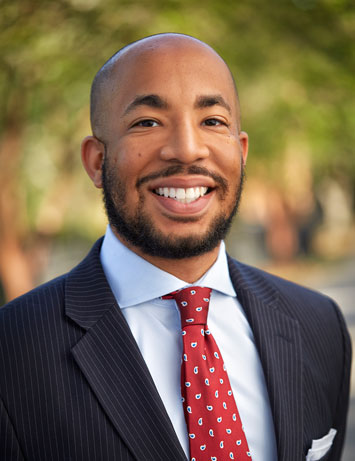 Sam Johnson represents clients before governmental agencies and in matters stemming from government action. He has developed a reputation for his skill in crisis management and navigating issues.

Prior to joining Nexsen Pruet, Sam helped lead the office of the Mayor under Mayor Stephen K. Benjamin. In working closely with Columbia, South Carolina’s 36th and current mayor as well as the 76th President of the US Conference of Mayors, Sam was instrumental in coordinating the Mayor’s agenda. During Sam’s tenure, the City of Columbia saw over $1 billion in economic investment.

Sam was actively involved in leading most of the Mayor’s visible and notable projects, including the Bull Street redevelopment project, a revitalization effort in one of Columbia’s most anticipated emerging neighborhoods, and the Famously Hot New Year Celebration, South Carolina’s largest New Year’s Eve party that regularly draws tens of thousands of partygoers to Columbia’s Main Street.

While Sam has affixed himself as a staple of the South Carolina political landscape, he has developed extensive relationships with elected officials and business leaders across the country. He routinely consults with leaders across the country on the best strategies to move their communities forward and to aid corporations in reaching workable public, private, partnerships.

His many experiences, vast network and firsthand knowledge of state and local government position Sam as an invaluable asset to Nexsen Pruet, NP Strategy and their clients.